hand in hand: a guide for spiritual leaders to prevent HIV transmission and eliminate HIV stigma within Australian migrant and refugee communities.

This resource provides you, as a spiritual leader, with insights on how you can contribute to preventing HIV transmission and address HIV stigma in your community and congregation.

Why spiritual leaders?
As a spiritual leader, you hold a place of respect, authority and leadership in society.  As such, you have the opportunity to make a real difference in  addressing HIV/AIDS in your community and congregation.

Your position can play a pivotal role in preventing HIV transmission; addressing
the debilitating effects of HIV stigma, and advocating for, and providing care and
support to, people living with HIV. 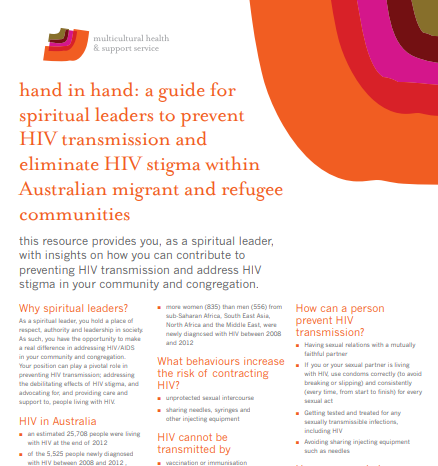