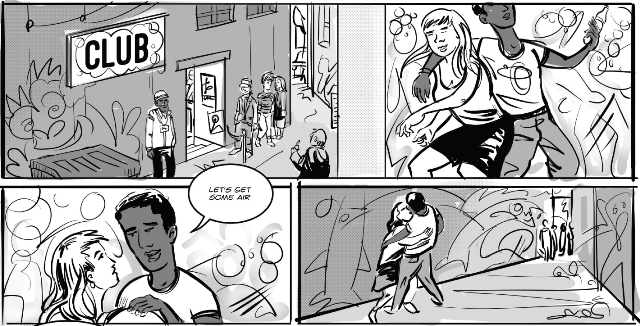 SHARE is a tool developed by CEH and technology studio Paper Giant, to help facilitate conversations with young people about sexual health, healthy relationships, gender and law.  The comics offer young people the opportunity to freely explore these themes in a fun and engaging way.

Research shows that young people from refugee and migrant backgrounds are interested to learn about sexual health, but are unlikely to look for information themselves.

Young people, particularly from refugee backgrounds may not have had opportunities for formal education, or sexuality education and may only come to learn about sexual health issues when facing a crisis such as an unplanned pregnancy or sexually transmissible infection. While some form of sexuality education is required in Australian schools, the quality and content varies greatly.

My own experience of sexuality education as a cisgendered white female in an all-girls school with no religious affiliation was inadequate to say the least. Our teachers cancelled normal classes for 2 periods (the periods relating to classes, not the menstrual type) one day during year 9. It was almost as if they suddenly realised they needed to fit in an hour and a half of sexual health education into our six years of secondary school and they were going to slip it in that day. Like many things slipped in haphazardly, the results were sub-par, albeit, in this case, memorable.

A hand-shake game highlighting the ills of having sex with lots of people without a condom, may have been effective had we been empowered with skills in negotiating sex and condom use.

I’m not sure if there was a condom demonstration, my only memory of a condom in that session at all, was when my best friend’s conservative Catholic mum walked into the classroom as our art teacher was blowing up a condom like a balloon, thus ending the school based sexual education for the class of 2002.

Lamisse Hamouda, who spoke eloquently about the importance of intersectionality in sexual health education at the MSHN forum, also wrote this incredible article, expanding my understanding of what sexuality education really should be.

Lamisse discusses the many categories that young people (and indeed us all) inhabit, such as socio-economic status, gender, culture, faith/religion, migration status, citizenship, sexuality and the make-up of the family unit.

Lamisse highlights how mainstream sexuality education reflects “the suburban white middle to upper class Australian experience, one where sexuality stereo-typically emerges with the imbibing of vodka cruisers at house parties and skate parks…” and asks how she, as a mixed-race Muslim woman could learn to navigate her sexuality when her cultural and social norms were not reflected in the curriculum or culture around her.

Lamisse argues for an intersectional framework to be integrated into sexuality education where the identities of young people are acknowledged, data is disaggregated, diverse perspectives and truths are acknowledged and there is ongoing dialogue where typically excluded voices are prioritised (seriously, please read her article!).

While SHARE appears as a relatively simple resource, a group of comics, with open questions (for example “What is happening in this comic?”) participants are given the opportunity to explore the resource from their perspective. There is a facilitator’s guide, to ensure key messages about sexuality and health are being addressed, but there is no wrong answer.

While SHARE is not a single solution, and is based on a limited (but expanding) set of scenarios, it presents more opportunities for diverse young people to find something to identify with, not simply identifying them as a homogenous group of ‘young people’.

CEH has welcomed a funding announcement from the Victorian Department of Health and Human Services that CEH will continue to manage Health Translations for the next 3 years.