Debriefing with an interpreter 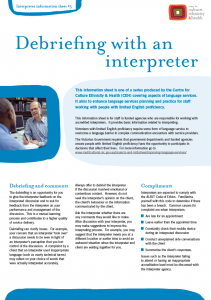 This resource is also available in pdf.

Interpreters are expected to comply with the AUSIT Code of Ethics. Familiarise yourself with this code to determine if there has been a breach. Common causes for complaint are when interpreters:

Interpreter agencies operate in a competitive market and agencies want to maintain the quality of services offered by their interpreters. They like to hear about the good work an interpreter has performed as well as any concerns. If you are dissatisfied with the conduct of your interpreter or the explanation offered during the debriefing, you have two options.

If the interpreter’s conduct is found to breach the AUSIT Code of Ethics, depending on the severity and whether the act is a repeat offence, you may request not to have this interpreter booked for your client(s) or even request that they are barred from interpreting in your organisation.

Links to other tip sheets in the language services series

This information sheet is one of a series produced by the Centre for Culture Ethnicity & Health (CEH) covering aspects of language services. Other tip sheets in this series include: