The BBV/STI Glossary is a resource for interpreters, translators and others who work in a health setting. It offers an extensive list of English terms related to sexual health and blood-borne viruses (such as hepatitis), with easy to understand definitions.

This is a joint project of the following individuals and agencies: 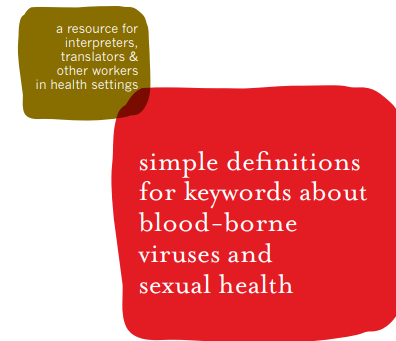 Abnormality
A finding that something (a test, a sign or symptom) is not within the normal range.

Abortion
A procedure to end a pregnancy.

Abstinence
To stop or avoid – voluntary restraint from an activity, e.g. sex, alcohol or drugs.

Adolescence
A stage of change and development in a young person’s life, which occurs between the onset of puberty and adulthood. Sometimes called ‘teenage years’.

AFP (Alpha-fetoprotein)
Elevated levels in the blood can indicate cirrhosis or liver cancer (HCC). Used for  screening for HCC.

AIDS (Acquired Immune Deficiency Syndrome)
The last stage of HIV infection, when a group of illnesses occur because HIV has severely weakened the immune system.

Alcohol dependence
The state of depending on or needing alcohol to avoid symptoms of withdrawal.

ALT (Alanine aminotransferase)
An enzyme produced by the liver that can indicate ongoing liver damage.

Anaemia
A decrease in haemoglobin (in red blood cells) that can cause various symptoms including tiredness and breathlessness.