Refugee Week aims to highlight aspects of the refugee experience and help the broader community to understand what it is like to be a refugee.

It kicked off Sunday the 14th of June and concludes with World Refugee Day on Saturday June 20. This year will be the first virtual Refugee Week. One of the aims of Refugee Week is to invite services reflect on whether they are providing the best possible services to refugees. Getting along to one of the events is a great way to start on this reflection!

At CEH we assist health, government & community organisations to offer a high quality of service to clients and people from migrant, refugee and asylum seeker back grounds. Our Multicultural Health & Support Service works with communities and health professionals to address the poorer health outcomes experienced by people from refugee & migrant backgrounds, asylum seekers and international students.
This week we take the opportunity to share 3 personal stories told to us by of our community members and shine a light on their journey to and experience in Australia.

The stories highlight some on the issues that people face on arrival and can support us all to consider the lived experience of clients from refugee and migrant communities, asylum seekers and international students.

As service providers we need to think about the barriers that inhibit good health for all, and how best to overcome them. The removal of these impediments is particularly important when addressing the highly stigmatised and culturally sensitive topics of BBV/STI

So, this refugee day, let’s make everyone feel WELCOME

We celebrate people’s journey, resilience, and adaption to a new home.
As a health service we also understand how difficult it can be for newly arrived refugees to navigate our health system and access specialised and culturally sensitive services in areas such as sexual and reproductive health. This is why we are here.

“I was born in 1989 in Jaffna (part of the Northern Province), Sri Lanka amidst a civil war. This war started 6 years prior to my birth and continued 20 years after. I am of Tamil descent as were my parents, grandparents and those before them, however this ethnicity was what the problem was.

As a child, I remember carelessly playing with my little brother under the large neem tree in our front yard, riding with my father on his motorbike to the market and sitting on my grandma’s lap in the middle of our rice paddy watching the sunset. Whilst, I cherish these memories, it is hard to separate them from the experiences we faced as the war worsened. The innumerable hours spent hiding in small bunkers, running for safety, being held by my mother during air strikes, losing our animals, farm, home and finally losing the life my parents and grandparents had built over the years. Our identity stripped away turning our family into nomads.

My father moved to Australia in search of our new adoptive home and in 1998 the rest of my family followed to start a new life. Although I found the Australian culture to be quite embracing of ours, I did encounter my fair share of racism. This was especially apparent, during my primary school years, where I was unable to speak english fluently to defend myself and still considered ESL (English as a Second Language). That being said I was still able to discern the racist comments expressed to my loved ones and I by those who were ill-informed. As a young adult I still encountered the odd statement “asylum seekers & refugees are queue jumpers” which was closely followed by “they should go back to where they came from”. It was these such comments which made me hide my story and why I was ashamed and embarrassed to admit I too was an asylum seeker.

All said and done, I still consider myself being blessed to have grown up here and am a proud Australian, but I now proudly tell people my story, of the struggles we faced to get here and how it was, adapting to growing up in a society that was completely different to mine. There are people amongst us who are informed and open minded can empathise with stories similar to mine but there is still a long way to go. My advice to anyone who has a similar story would be, to be proud of your cultural heritage and share it with your neighbours, it will enrich and enhance your communities. I am so grateful to this land and it’s people for allowing me a safe place and a safe future for not just my generation but generations to come.” 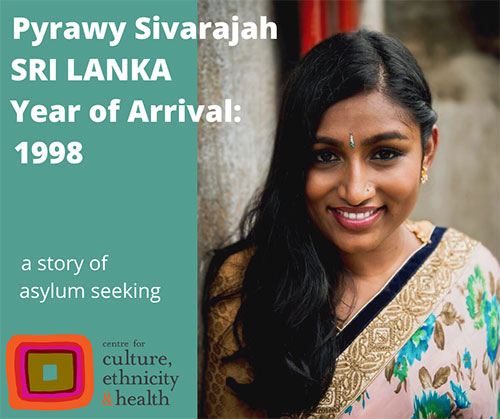 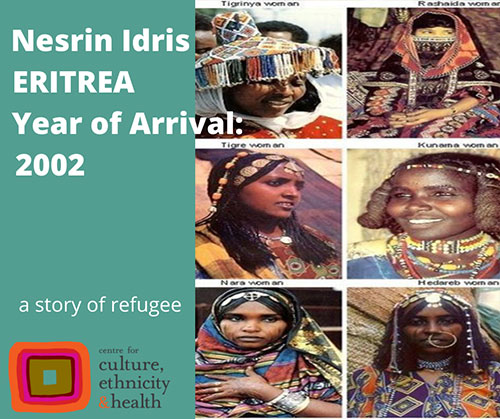 Being forced to leave your home and country means leaving behind your memories and your community. This loss can then be made harder by racism and other structural barriers in the new country.
Our role is to help people navigate the local health and welfare services so that they feel more secure and healthy.

“I came to Australia in when I was 20 years old in 2002 from Eritrea. It was a very difficult time as I was away from family, friends and all things familiar. Learning English was a huge challenge and making a new life for myself was not easy. Like so many refugees/migrants, trying to adapt a new way of life while holding on to my identity was my focus. I had my due share of racism and I combat it by being proud of who I am and sharing my heritage and culture with others so everyone can see that we are all really the same. The memory of the many stories that I shared and heard from others and their journey to Australia are a testament to the resilience and strength of refugees by not accepting it or being affected or intimidated by it.

My coping strategy during COVID-19 is by focusing on the positive side (more time with family, being safe form the virus, having basic needs) and by trying to stay connected and help others around me who might be struggling (neighbours, friends, people in community).”

M-CAN brings together members of refugee & migrant communities to help like-minded people work towards improving the sexual health of their own communities.