Refugee Alternatives 2019: Five key things we should do to improve Australian refugee policy 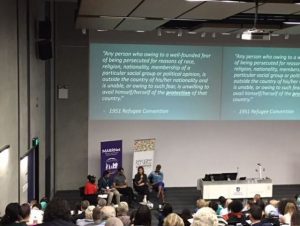 The theme for this year’s conference, ‘Platform for Change’, focused on five key changes to Australian refugee policy:

The issues with offshore and mainland detention are complex, but there may be practical steps towards reforming Australia’s immigration detention system, such as banning offshore processing and ending the ‘turning back’ of people on boats.

Asylum seekers in Australia should be treated humanely, and their claims for protection fairly considered.

This includes the provision of sufficient access to supports and services, and protection to those who have been granted refugee status or unfairly refused.

Instead of mandatory and indefinite immigration detention, new rules should be implemented—for instance, setting time limits on detention and banning the detention of children.

Considering Australia has the moral duty and ability to accept more refugees, we should increase the number of places for resettlement.

We should also offer more ways for protecting people, such as improving community sponsorship programs, starting programs for children at risk and allowing refugees in Australia to reunite with their family.

Our government should collaborate with our neighbours to determine the best ways to lend people displaced by conflict and persecution support.

The great complexity of this issue needs support from people of all areas and levels of experiences and expertise. This is why the Refugee Alternatives Conference involved a broad range of people, from participants from refugee backgrounds to academics and policymakers, to find out how each can do their part in tackling the issue at a grassroots level. CEH wass proud to be a part of the conference and this ongoing work.